Another excellent piece from The Globe and Mail – Robert

The majority of Canadians are in debt but nearly half of them are trying  to pay off their dues ahead of schedule, according to a survey conducted for a major bank.

The study, commissioned by CIBC, found that 72 per cent of respondents said they held some form of debt such as a mortgage, student loan or credit card.

More related to this story

However, about 49 per cent of those responding to a phone survey conducted for CIBC said they’ve made an extra lump sum payment in the last year to try and bring down what they owed.

“Debt management is top of mind for Canadians, and these poll results show that many Canadians are taking steps towards reducing their debt,” said Christina Kramer, CIBC executive vice-president of retail distribution.

The bank said the results show that Canadians are focused on reducing their debts amid warnings about rising household debt.

The Bank of Canada and some economists have warned that Canadians are piling on too much debt while interest rates are low, and some may no longer be able to afford their homes when interest rates rise.

CIBC said that while the findings show many Canadians are conscious of debt management, past research has suggested that most are likely to seek out advice about retirement planning before they pursue financial guidance on their debts.

The phone survey was conducted by Harris-Decima from a poll of 2,003 Canadians between March 22 and April 2.

Something we should be aware of. We’ll keep you posted as things develop. RH

From Tuesday’s Globe and Mail

Canada’s mortgage brokers are warning the banking regulator that its proposed mortgage underwriting rules could result in people losing their homes.

The brokers are concerned about a number of the potential rules, but the one that worries them most outlines what banks would have to do when a consumer wants to renew or refinance their mortgage.

The proposed rules suggest that banks recheck areas such as employment status, current income and the current value of the home for renewals and refinancings.

“This would be a significant, significant change,” Jim Murphy, the head of the Canadian Association of Accredited Mortgage Professionals (CAAMP). Currently, when mortgages come up for renewal, banks tend to focus on the borrower’s payment history. They rarely appraise the property again and not all banks will check the borrower’s updated income level, Mr. Murphy said. “CAAMP strongly recommends that this concept be clarified so that mortgages continue to be renewed at maturity without requalification,” the industry association said in a submission to the Office of the Superintendent of Financial Institutions (OSFI). “If not, homeowners who have been in compliance may no longer qualify. This would result in a number of properties hitting the market at the same time and thereby driving down prices.”

Such a phenomenon could add further fuel to a real estate downturn if lower house prices and higher unemployment caused more people to lose their homes upon renewal, Mr. Murphy suggested.

OSFI unveiled the proposed new rules in March, and requested submissions from the industry. Rod Giles, a spokesman for the banking regulator, said it has received a significant number of submissions from trade associations, lenders, insurers and the brokers as well as private citizens.

OSFI is still reviewing them, but hopes to release final rules by the end of June, along with a summary of the submissions and the reasons for its decisions. It released the potential rules after the Financial Stability Board, a global financial oversight body, called on all regulators to ensure mortgage lenders were adhering to certain underwriting principles. But, with Ottawa seeking to prevent a runup in Canadian house prices from leading to a crash, Canada’s proposed guidelines go a bit further.

OSFI has signalled it wants banks to limit home equity lines of credit to 65 per cent of a property’s value. “Many borrowers use HELOCs to invest in capital markets or even for their own business purposes,” CAAMP says in its submission. “In this way, many Canadians are using their HELOCs for retirement and job creation – a positive goal which the government is trying to encourage.”

Canada’s six biggest banks held $912-billion worth of exposure to the residential mortgage market at the end of January, according to figures compiled by Fitch. That included $730-billion of mortgages and $182-billion of home equity lines of credit. The mortgage brokers would like to see people with good credit and income be able to borrow more than 65 per cent of the value of their home.

One proposed rule that the group applauds would eliminate so-called “cash back” mortgages, which essentially allow a consumer to borrow their down payment from the bank. In 2008, Finance Minister Jim Flaherty changed the rules so that consumers had to put at least 5 per cent down (after a period of time during which Ottawa had allowed mortgages with a zero down payment). However, Ottawa left the door open for consumers to borrow that 5 per cent.

The big banks subsequently came out with products in which they will lend a mortgage and give the borrower an amount equal to 5 per cent of the value up front (at a steeper rate). “Borrowers should have ‘skin in the game,’ ” CAAMP said in its submission.

Want to buy a cottage?

A lot of good information in this Financial Post article and also the Royal LePage Recreational Property Report which you can find in full on my website, or click here.

Weigh the costs versus the rewards 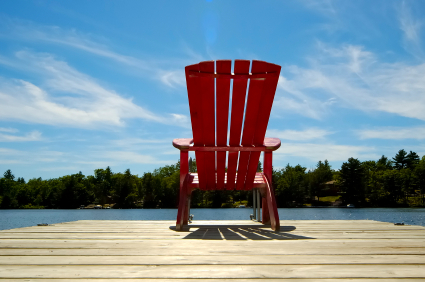 With summer just around the corner, vacation plans begin to formulate. For many, this includes an extended stay at the family cottage. This article from the Financial Post gives a good background of information for those looking to purchase a vacation property.

Possibly the most important factor to take into account when looking to purchase a cottage is the mortgage. Lending terms and interest rates for “recreational properties” are different than those of a principal residence. It is always a good idea to consult a qualified mortgage specialist to advise you on the different options available.

This article also explores the possibility of renting your cottage out while you’re at home, giving your vacation spot the potential to be an investment property, and providing some tax benefits. Of course, it is essential to factor in maintenance and repair costs.

Is this where we are going?

I found an article in an old National Post dated December of last year. It really made me think. Yes, it’s about Vancouver and they’re all a bit crazy there (sorry!) – but then, maybe they are just a bit ahead of us here in Ontario. Maybe it will happen here too! Certainly it’s true that condo apartments are getting smaller and smaller but there has to be a limit – hasn’t there? Already we are looking at apartments under 500 square feet and of course we can understand the reasons that people are buying them. Smaller price tags, less condo fees and utilities. It offers a way to break into the market for young professionals, especially those living alone, working downtown. Just a place to rest their heads and grab a quick shower. But I wonder how many would be willing to shoe-horn themselves into a space like the one described below. The apartment described is actually a rental but if they can build it to rent, they can build it to sell! I’d welcome a comment from you, my readers!

Micro-living: Canada’s smallest apartment the size of a walk-in closet

Extracted from an article in The National Post by Karen Hawthorne  Dec 21, 2011

Andrea Wong, relaxes on her pull-down Murphy bed in her 291-square-foot apartment.

Need to declutter your home and silence that inner voice egging you on to buy more stuff? Don’t risk the producers of Hoarders showing up on your doorstep. Down-size to a 226-square-foot apartment in Vancouver.

This clean-lined apartment is just 247 square feet. The city known for expensive real estate has unveiled the smallest self-contained rental suites in the country — just 226 to 291 square feet — renting for about $850 per month, including cable and Internet. Location comes with a price tag, of course. When the bed is up and away, the table comes out. Handy! All in 237 square feet.

The tenants, most 25- to 35-year-old working professionals, say they appreciate the chance to live in the historical downtown core, even if it means sacrificing on space. “It doesn’t feel that small,” Lia Cosco says of her top-floor corner suite with three large windows, “a ton of exposed brick, and a beautiful view of the North Shore Mountains.”

Unit bathrooms are compact. There’s a drain in the floor in case water from the shower sprays beyond the stall.

All suites in the five-floor building have space-efficient design, including flat screen TVs, compact appliances — a dishwasher, but no oven — and built-in pull-down wall beds with integrated folding tables. Put up the bed in the morning and fold out the table. unit comes furnished with a sofa, chairs and coffee table.

Cosco calls it a “cosy nook.” She walks five minutes to work, and says she would have paid the same price or more for 400 square feet in a neighbourhood much further from work. This is the first time she’s been able to afford her own apartment. “It’s the price for space allocation in the neighbourhood. When people say Vancouver is too bloody expensive, well it is.”

The downside? There’s a microwave and stove-top elements but no oven, no bathtub and the windows are not double-paned, so noise can be a problem with buses going by and people getting loud during the night, Cosco says. “It’s not forever, but it’s great for right now.”